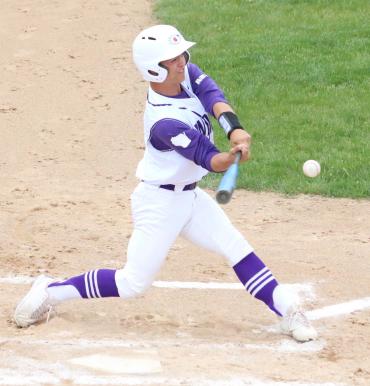 Independence/Gilmanton’s Connor Smieja squared on a pitch during their game against Cochrane-Fountain City last week.            (Times photograph by Andrew Dannehy)

Three wins last week made it 10 straight for the Independence/Gilmanton baseball team before they lost to a team that beat them before the streak began.

After losing to Eau Claire Immanuel Lutheran on May 13, the Indees went on a run of 10 straight wins including wins of 4-1 over Blair-Taylor, 8-3 over Pepin/Alma and 6-5 over Cochrane-Fountain City last week Tuesday, Wednesday and Thursday. On Friday, however, the Lancers got the best of the Indees again, winning 7-5. No further information from the last three games was sent to the Times ahead of deadline.

The loss put I/G’s record at 15-3 and clinched the Dairyland Conference title for the Lancers, who sit at 15-2 in DC play, while I/G fell to 13-3 before playing Eleva-Strum on Monday of this week.

The Indees are the top seed in their Wisconsin Interscholastic Athletic Association regional and will play the winner of the game between (5) Eleva-Strum and (4) Blair-Taylor this coming Tuesday. The regional final will be played on Wednesday.

The Indees rallied late, scoring all four runs in the fifth and sixth innings.

The Indees took the lead in the fifth as Hunter Guenther led off with a single and came around to score. Wyatt Kuerschner singled with two outs and was followed by singles from Tyler Brantner and Connor Smieja before scoring on a passed ball.

I/G added two more runs in the sixth as Jackson Konter led off with a walk before Chris Killian doubled and Kuerschner singled, making the score 4-1.