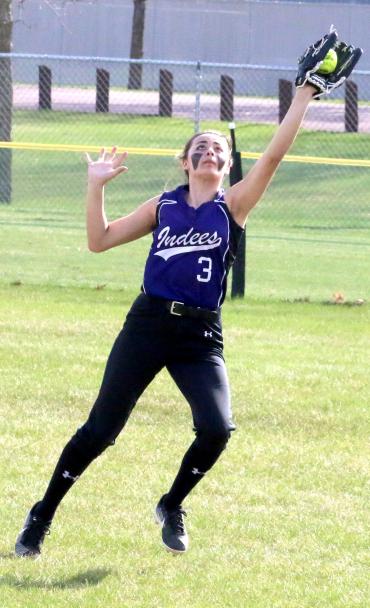 Emma Cowen of Independence/Gilmanton made a running catch during their game against Cochrane-Fountain City on Friday.            (Times photograph by Andrew Dannehy)

The Independence/Gilmanton softball team had losing and winning streaks within the same week as they won three of the seven games they played.

It started out with losses as I/G fell to Pepin/Alma last week Monday before being swept in a doubleheader by Blair-Taylor Tuesday (see story elsewhere in Sports) and losing to Eau Claire Immanuel Lutheran on Thursday. They rebounded with a 14-6 win over Cochrane-Fountain City on Friday before sweeping Unity in a doubleheader on Saturday.

I/G took a 7-8 record into this week, they’ll play Loyal on Thursday and Eleva-Strum on Friday, both at home. This coming Tuesday, they’ll head to Alma Center Lincoln for a doubleheader before Wisconsin Interscholastic Athletic Association tournament play begins next Thursday.

The Eagles scored four runs in the first inning and the Indees never caught up.

Two of the runs came on a one-out double before a sacrifice fly made the score 4-0.

I/G had four hits in the game, two by Hilari Klopp who went two-for-four with two RBIs.

It was another high-scoring loss for the Indees. This was the seventh time they’ve played in a game in which the teams have combined for at least 15 runs, but the Indees have just a 2-5 record in those contests.

The scoring got started early as the Indees put up four runs in the top of the first inning only to see the Lancers come back with seven in the bottom half.

Maggie Woychik singled in the third and fourth runs of the first to put the Indees ahead 4-0. The Lancers responded with three doubles and a single, while taking advantage of three I/G errors as they scored seven in the bottom half of the inning.

The Indees had another big inning in them as Emma Cowen got a five-run fifth started with an RBI single. Klopp singled in two runs to tie the game before Amiah Ives singled in two more to put the Indees ahead 9-7.

That lead stood until the bottom of the seventh when the wheals fell off with two outs.

A hit batter put the Lancers in business before a single put the tying run on. ECI tied the game with a double and won it with a single.

The Indees pulled away with five runs in the sixth inning.

The scoring in the sixth was started by a two-run home run by Dejno. Aubrie Pronschisnke then singled, came around on an error and scored on a single by Evans. Ives later added a two-run single to put the Indees ahead by the final score.

I/G had 14 hits in the game as Aubrie Pronschinske went four-for-four while Evans, Klopp, Ives and Woychik all had two hits. Evans and Ives both had three RBIs, Klopp and Dejno had two.

Evans got the win, allowing nine hits and three walks while striking out four.

A four run fourth was the difference for the Indees.

I/G scored one in the bottom of the first and another in the third after Unity had tied the game in the second.

A two-run single by Evans put the Indees ahead 4-1 before another run scored on a fielder’s choice and a fourth on an error. Unity scored one in the fifth, but the Indees were in control.

Leah Sylla was the winning pitcher, allowing eight hits while striking out three without a walk.

It took just three innings for the Indees to put up 15 runs and end the game.

I/G scored four runs in the top of the first, six in the second and five in the third before the game was called due to the mercy rule.

Evans was the winning pitcher allowing two hits while striking out two in two innings.