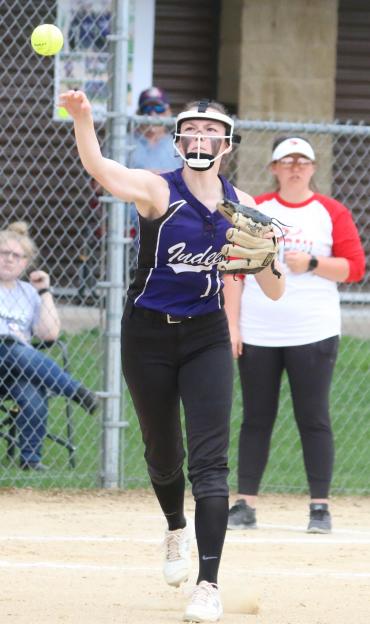 Aubrie Pronschinske of Independence/Gilmanton made a throw to first during their game against Eleva-Strum on Friday.                        (Times photograph by Andrew Dannehy)

The Independence/Gilmanton softball team showed the ability to come through in the clutch in two wins last week.

The Indees scored eight runs late to beat Loyal 12-7 last week Thursday. On Friday, they scored three in the bottom of the seventh to beat Eleva-Strum.

After a doubleheader at Alma Center Lincoln on Tuesday, the fourth-seeded Indees will begin Wisconsin Interscholastic Athletic Association play at home against (5) Kickapoo this coming Tuesday. The winner of that came will likely play Blair-Taylor in the regional final next Thursday.

The Indees scored eight runs combined in the fifth and sixth innings as they pulled ahead and took control of the game.

I/G trailed 7-4 entering the bottom of the fifth, but two runs scored on errors to bring the Indees within a run. Aubrie Pronschinske then singled home the tying run before Lydia Evans doubled two in, putting the Indees ahead 9-7.

Maggie Woychik singled in one run in the sixth then Kassidi Dejno got a grounder through the infield, bringing home two runs.

I/G had 10 hits in the game, led by Aubrie Pronschinske who was three-for-five with three RBIs. Woychik added two runs and two RBIs while Dejno, Hilari Klopp and Evans also batted in two runs.

Evans got the win in the circle, striking out six while walking six and allowing 11 hits.

The Indees scored six runs in the last two innings as they picked up a walk-off win.

I/G trailed 4-1 entering the bottom of the sixth, but put up three runs to tie the game.

The Cardinals came right back with two in the top of the seventh, but the Indees had an answer.

Klopp led off the bottom of the seventh with a single and scored on a hit by Adison Pronschinske. After another run scored on an error, Woychik hit a grounder that allowed Rhianna Theisen to score the winning run.

The Indees took an early lead with a run in the bottom of the first, but the Cardinals scored three in the third and another in the fifth.

Woychik got the Indees on the board again with an RBI single in the sixth, another run scored on a sacrifice bunt and the game was tied on a groundout.

E-S scored two with two outs in the seventh, but the Indees answered for the win.

I/G had eight hits in the game with eight different players getting one. Woychick batted in two runs.

Leah Sylla got the start and pitched the first 6.1 innings with five walks, six hits and three strikeouts. Dejno finished the game, allowing one hit and two walks while striking out one.