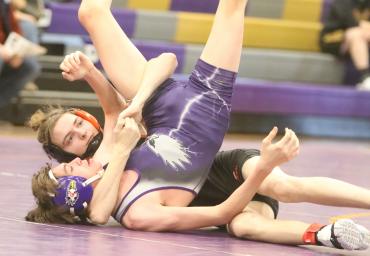 Whitehall’s Brock Johnson tried to secure a pin against Charles Baize of Independence/Gilmanton during the Durand regional on Saturday.            (Times photograph by Andrew Dannehy) 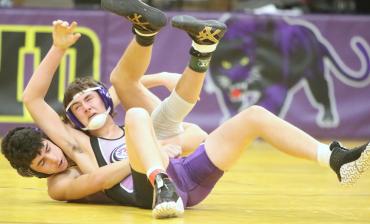 Max Marsolek of Independence/Gilmanton worked to get his opponent to his back during the Durand regional on Saturday.            (Times photograph by Andrew Dannehy) 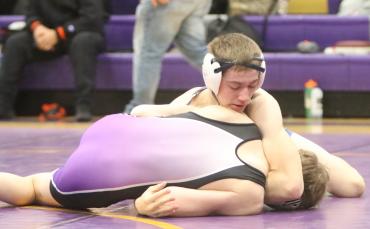 Blair-Taylor’s Gunar Koxlien attempted to turn Independence/Gilmanton’s Gabe Pietrek to his back during their match at the Durand regional on Saturday.            (Times photograph by Andrew Dannehy)

With more than half the team advancing to the sectional round, the Whitehall wrestling team won the Wisconsin Interscholastic Athletic Association Division Three Durand regional by more than 30 points on Saturday.

With the tournament win, the Norse qualified for the WIAA Team Sectional at Cadott on Tuesday of this week. They’ll take on Cadott with the winner of the dual advancing to the sectional final that same night. The sectional champion will wrestle at the team state tournament in Madison on March 4 and 5.

By taking either first or second place, seven Whitehall wrestlers advanced to the individual sectional at Saint Croix Falls this Saturday. They will be joined by five wrestlers from I/G and five from Blair-Taylor.

There, the top three wrestlers in each weight class will qualify for the individual state tournament in Madison Feb. 24 to 26.

Four of the seven Whitehall wrestlers to qualify for the sectional did so as regional champions.

Among the regional champions was Wylie Dunn (285) a state qualifier a year ago. Dunn received a bye in the first round before his next two matches lasted a total of 90 seconds. First he pinned Jonah Linse of Mondovi in 17 seconds then topped I/G’s Blaine Severson in 1:13 to win the title.

Matthew Poulos (132) had less time on the mat than Dunn, though he only wrestled one match. Poulos had two byes before pinning Cody Vollmer of Mondovi in 1:21.

Flores had to win a wrestle back match to get into second. He lost his first match to B-T’s Ryan Flynn before beating Lucas Train of Durand in overtime. He then pinned I/G’s Max Marsolek in 2:25 to win second place.

Petersen pinned I/G’s Alex Johnson in the second round before falling to Durand’s Joey Baker. He kept second place as Johnson was the third-place wrestler.

Brock Johnson had a similar tournament as he won his second match and lost in the championship, but held on to second place because a wrestler he already beat took third.

Bragger pinned Mitchell Fedie in the semifinal round then took down B-T’s Bryan Rogstad in the championship.

Severson beat Durand’s Ubaldo Martinez 1-0 in the semifinal before losing to Dunn. He held onto second place as Martinez was third.

Rombalski and Leon both lost their only matches in the championship round, but there were only two wrestlers in their weight classes.

All five of B-T’s wrestlers advanced including two champions.

Elvaker only needed one win as he pinned Mondovi’s Tristen Teigen in 1:26.

Koxlien pinned I/G’s Pietrek before losing to Whitehall’s Katzman. He did not have to wrestle again.

Shramek scored a 9-6 win over Whitehall’s Kulig before falling 5-3 to C-FC’s Sam Schutz. He did not have to wrestle again as Kulig took third.

Rogstad beat Whitehall’s Eric Kleinhans 9-3 before falling to I/G’s Gavin Bragger. He did not have to wrestle again.