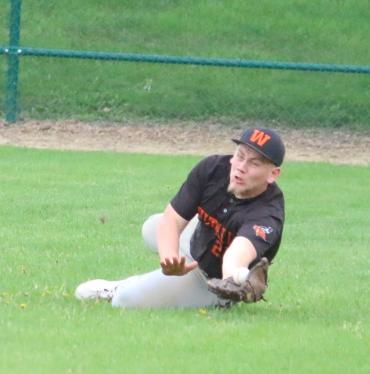 Whitehall’s Isaac Skoyen made a diving attempt to catch a fly ball during their game against Augusta on Friday.            (Times photograph by Andrew Dannehy)

The Dairyland Conference title was in striking distance for the Whitehall baseball team at the beginning of last week. By the end, however, the team dropped to fifth in the standings.

The Norse still felt good about their chances after a 1-0 loss to DC-leading Eleva-Strum last week Tuesday. A rematch with the Cardinals this week gave them a chance to get that game back. However, it was followed by a 5-3 loss to Eau Claire Immanuel Lutheran on Thursday and a 10-0 loss to Augusta on Friday.

Wisconsin Interscholastic Athletic Association play is set to begin next Thursday, but Whitehall’s bracket had yet to be announced as of press time.

Consecutive doubles with one out in the third inning put the Cardinals ahead for good.

The top two batters in the E-S lineup, George Munson and Carter Gunderson both raked doubles in the bottom of the third, with Gunderson’s bringing Munson home. The next two E-S batters walked, but a strikeout ended the threat.

Whitehall kept E-S in check the rest of the game, but didn’t get any run support.

The Norse threatened in the fourth when Bryce Schorbahn walked and moved to second on an error, but a fly out ended the inning.

Brock Sluga doubled with two outs in the sixth before the Cardinals issued an intentional walk to Eric Kleinhans. The double was the only hit the Norse would get in the game as Schorbahn flew out to end the threat.

The Norse were retired in order in the seventh.

Brayden Lisowski took the loss for the Norse, pitching into the sixth inning with five hits, five walks and two strikeouts. Mike Spare finished the game, striking out one and walking one in two-thirds of an inning.

Gunderson got the win for the Cardinals, limiting the Norse to one hit and two walks while striking out six. Five different E-S batters had one hit.

The Lancers scored four runs in the top of the seventh to steal the win.

The Norse had a 3-1 lead with two outs in the top of the seventh, but the next ECI batter doubled to tie the game. A single put the Lancers ahead and an error gave them an insurance run.

Aidan Sonsalla walked to start the second for Whitehall, but two strikeouts and a groundout ended the game.

The Lancers took the lead in the top of the second, but an RBI single by Eric Kleinhans tied the game, Kleinhans later scored on a wild pitch. The Norse added another run in the fifth when Bryce Schorbahn singled home Devon McCune.

McCune took the loss, pitching into the seventh with eight hits and two walks, while he struck out four.

The Norse had just three hits in the game with three different players getting one.

The Beavers took advantage of some Whitehall errors as they built a big lead early.

In the first two innings, the Norse had three errors, a passed ball and a wild pitch as the Beavers jumped out to a 7-0 lead. Two walks, a hit batter, two wild pitches and an error helped Augusta put up three more in the sixth as they won the game by the mercy rule.

Whitehall had five hits in the game, two by Schorbahn as they never really threatened Augusta’s lead.

Michael Spare got the start and the loss, pitching 1.2 innings before Seth Lambeck pitched 3.1 and Beighley finished the game, pitching the sixth. In all, Whitehall pitchers allowed seven hits and five walks.