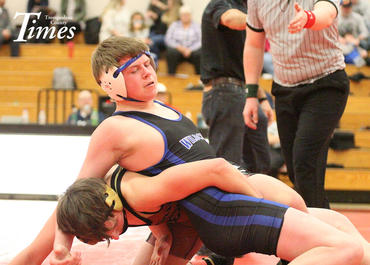 Blair-Taylor’s Bryan Rogstad worked for a reversal during their match against the Gale-Ettrick-Trempealeau/Melrose-Mindoro reserve team at the Dairyland Conference dual meet at Cochrane-Fountain City on Thursday.

With one champion and four second-place finishers, the Whitehall wrestling team took third at the Indee Invitational in Independence on Saturday.

In one of the final tune-ups before Wisconsin Interscholastic Athletic Association competition begins, the Norse scored 162 points finishing behind the Gale-Ettrick-Trempealeau/Melrose-Mindoro Varsity Reserve team, 188; and Stanley-Boyd/Owen-Withee, 231. Royall finished fourth in the team standings with 150 points while Blair-Taylor was fifth with 146.5. The host Indees finished seventh with 117, behind Westby's 140. Wylie Dunn (285) claimed the lone championship for the Norse wrestling squad. After a first round bye, Dunn won by pin before sneaking past B-T's Chris Rogstad, 4-0. Dunn then controlled his championship match, defeating Damion Tracy of Onalaska/Onalaska Luther 14-5.

Liam Herrick (220), Silas Nelson (182), Eric Kleinhans (160) and Alex Katzman (120) all finished second for Whitehall. Katzman scored two first period pins after a bye in the first round, but was then pinned by Devon Lee of New Lisbon in the championship match. Kleinhans scored a pin and a 10-6 win before being pinned in the championship. Nelson got a pin in the quarterfinal found and an overtime win in the semifinal before being pinned by B-T's Logan Shramek. Herrick narrowly escaped with a 13-12 win in the quarterfinal before getting a pin in the semifinal and being pinned in the championship. Also placing for Whitehall was Connor Gleeson (138), fourth; Matthew Poulos (113), fifth; and Ryan Kleinhans (170), sixth.

Shramek was the lone champion and one of four top-three finishers for the Wildcats. The 2019 state qualifier won all three matches by pin, only one of which even got to the second period. Rogstad finished third for B-T as he won his first two matches before falling to Whitehall's Dunn. He rebounded with two pins to finish third. Colton Lejcher (113) and Gunar Koxlien (120) both finished third. Lejcher had a bye in the first round then a pin before losing to Alexander Nitz of SB/OW 4-3 in the semifinal round. He rebounded with a technical fall and an 8-2 win to take third. Koxlien lost in the quarterfinal round, but finished the day with three pins. Matthew Betker (170) and Noah Shepherd (160) both finished fourth for the Wildcats while Bryce Elvaker (152) was fifth. Ethan Severson was the lone champion for Independence/Gilmanton. After a first round bye, Severson picked up two pins to advance to the championship where he pinned Necedah's Lane Meltesen in 5:31. Jackson Konter (113) took second for the Indees. After a first round bye, Konter pinned his way to the championship match where he was pinned by Nitz of SB/OW. Also placing for the Indees was Gavin Bragger (160), Alex Risler (145), Connor Smieja (138); all in fifth while Gabe Pietrek (106) and Gabe Rombalski both finished sixth.

Typically a varsity wrestler, Bryce Burns (195) cruised for the tournament championship for the G/M Varsity Reserve team. After two byes, Burns won both of his matches by pins in the first period. The G/M team also got second place finishes from Brooks Johnson (106) and Dylan Mason (145) while Max Marley (152) and River Rommel (170) took third. Also placing for the G/M reserves was Carter Sacia (120), Ben Peterson (132), fifth; Justice Vaaler (160), Hogan Nichols (138) and Hayden Fry (113), sixth. The Arcadia Varsity Reserve team also competed, but none of the three wrestlers they had competing placed.