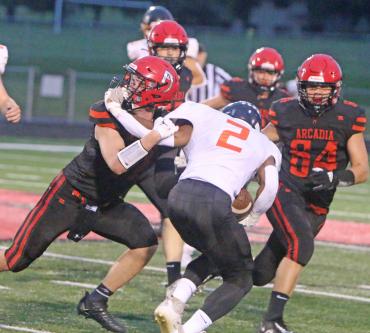 Arcadia’s Caleb Glenzinski had his facemask pulled as he secured a tackle during their game against West Salem on Friday.      (Times photograph by Andrew Dannehy)

A renewed Coulee Conference rivalry went West Salem’s way as the Panthers scored five touchdowns in the first half before the rest of the game was cancelled due to storms.

Arcadia’s defense stopped West Salem on their first possession, but the Panthers scored nearly every other time they had the ball – and once when Arcadia had the ball – as they opened up a 35-0 halftime lead before storms rolled in.

Arcadia’s defense got a couple of stops early, but they struggled moving the ball and West Salem quickly took control of the game.

The Panthers had a big play called back due to an illegal block on their first possession and then Caleb Glenzinski and Max Blaschko got a tackle for a loss on third-and-12, forcing a punt.

But the Raiders couldn’t do anything with the ball. They went three-and-out before another punt and it would be a sign of things to come. The Raiders had just four first downs and 30 total yards, including negative-11 rushing.

It took West Salem just three plays to march 43 yards for the touchdown, including a 27-yard run by Chris Calico. Brett McConkey ran for nine yards and the point after made the score 7-0.

Arcadia’s next drive ended with an interception, but their defense came through, stopping West Salem on fourth down.

After losing yards, another interception gave West Salem the ball at the Arcadia 25. The Panthers picked up one first down before McConkey found the end zone again, this time from 10 yards out. The point after made the score 14-0.

The Raiders lost three yards on their first play of the next drive before Egan Pauly’s pass was again intercepted, this time by Brennan Kennedy, who returned it for a touchdown. The point after put West Salem ahead 21-0 with 1:22 left in the first quarter.

A three-and-out gave West Salem the ball back near midfield and they scored again on the second play of the second quarter, this time a two-yard run by Luke Noel. The Panthers added a 75-yard touchdown drive that ended with a seven-yard score by Noel and a point after.

Arcadia started to move the ball on their next possession as Cam Boland passed to Pauly for 32 yards on a third-and-12 play. The drive went down to the West Salem 18 before a fumble gave the Panthers the ball back.

The teams went in for halftime and didn’t come back out after storms hit the area.

West Salem was efficient as McConkey passed five-for-nine for 63 yards and ran for 62 yards on six attempts. Noel had 70 yards on nine rushes.

Boland’s shift to quarterback gave Arcadia’s passing attack life as he was able to utilize Pauly as a receiver. Boland was five-for-10 for 41 yards passing with Pauly catching three passes for 43 yards – the other two completions were for losses.