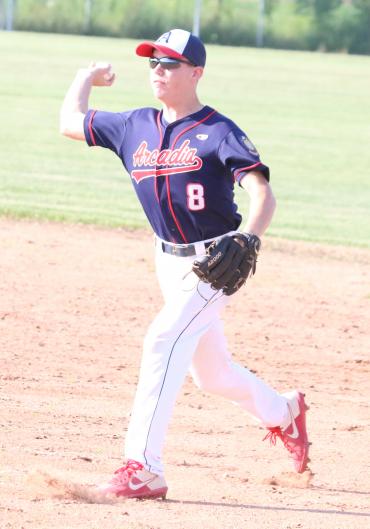 Arcadia’s Gage McGuire threw to first for an out during their game against Tomah last Thursday.  (Times photograph by Andrew Dannehy)

Post 17’s three losses last week were by a combined five runs as they suffered walk-off losses on Monday and Saturday. The lone win came on Thursday when Arcadia controlled the game against Tomah, winning 10-0.

The Arcadia team concluded its regular season with a home game against Gale-Ettrick-Trempealeau on Monday of this week. They were 5-7 before that game.

Post 17 will compete in the Wisconsin American Legion Class AA regional tournament in River Falls, beginning on Friday. The double-elimination tournament had Arcadia playing first against River Falls at 3 p.m. then against New Richmond at 5:15. Games are scheduled to run until July 27 — though with three teams in the regional, it would likely end before then.

The Class AA state tournament will be held July 30 to Aug. 3 in Antigo.

Post 17 scored first, but that’s all they could manage in the no-hit loss.

Carson Martin led off with a walk and scored on a passed ball to put Arcadia ahead 1-0 in the top of the first.

BRF matched that run in the bottom of the first as a dropped third strike put a runner on. Two groundouts and a wild pitch helped BRF tie the game.

BRF scored two more runs in the third then added one in the fifth.

Arcadia struggled to put the ball in play, striking out 17 times in the game. They managed three walks, but couldn’t keep up with BRF’s Bryson Gasch, who had 15 of the strikeouts.

Alex Madden took the loss for Arcadia, allowing four hits and two walks, while striking out five. Two of BRF’s runs were unearned.

Arcadia’s bats woke up early in the second game, but it still wasn’t enough.

A three-run double by Gage McGuire put Arcadia ahead 4-0 in the top of the first inning. Alex Madden added an RBI single in the second before Connor Weltzien scored on a fielder’s choice to give Post 17 a 6-0 lead.

It wouldn’t last, however, as BRF came back with seven runs in the bottom of the second inning.

Arcadia tied the game when Logan Aspenson hit into an error in the top of the fifth. Aspenson then put Arcadia ahead when he scored on a hit by Weltzien.

Post 17 couldn’t get an out in the bottom half of the inning. After a double and a walk, a single tied the game. Another single loaded the bases before a hit batter brought in the winning run in the scheduled five-inning game.

Martin and Madden both had two hits as Arcadia had six as a team. McGuire had three RBIs while Caleb Nisbit, Madden and Weltzien all had one.

Prestin Scow took the loss, pitching the final 2.1 innings with five hits and one walk allowed while he struck out three. McCoy Yarrington got the start, allowing seven this and four walks in 1.2 innings. Four of BRF’s runs were unearned.

It was all Arcadia as Post 17 took an early lead then pulled away late to win by the mercy rule.

A groundout and an error helped put Arcadia ahead 2-0 in the bottom of the first as Cam Boland had the only hit for the team in the inning. Carson Pehler added a two-run single in the second, putting Arcadia ahead 4-0.

Madden added to the lead with an RBI single in the fourth. Four runs in the fifth helped break the game open.

Vince Braun led off with a double, followed by a single by McGuire. Yarrington brought in one run on a fielder’s choice before Wyatt Siebel scored two with a single. Siebel later scored on an error, making the score 9-0.

The game ended in the seventh when Walker Slaby was hit by a pitch with the bases loaded, scoring Bill Breska, who doubled earlier in the inning.

Breska was three-for-four in the game while Pehler added two hits and six other Arcadia players had one hit. Pehler had three RBIs, Siebel added two while Slaby, Yarrington, and Madden had one.

Boland got the win, pitching the first two innings without allowing a hit or a walk and striking out four. Weltzien pitched three innings, striking out six to one walk and Madden pitched on inning with one hit and one strikeout.

Despite managing two hits in the game, Arcadia had the lead until the final frame.

Post 17 entered the bottom of the seventh with a 3-2 lead, but they weren’t able to get any outs in the last inning. La Crosse loaded the bases with two hits and a hit batter. A single tied the game and another gave Post 52 the win.

Arcadia took an early lead as Boland led off with a double and scored on a passed ball. Pehler scored on a groundout later in the inning, putting Arcadia ahead 2-0.

Post 52 came back with two runs in the third to tie the game, but Arcadia came back in the top of the fifth when Pehler was walked with the bases loaded, making the score 3-2. That’s where the score stood until the final at-bat.

Boland and Siebel had Arcadia’s only hits, though they did manage four walks.

Boland took the loss, pitching a third of an inning with three hits, no walks and no strikeouts. Madden got the start, pitching six innings with nine strikeouts while allowing four walks and five hits.