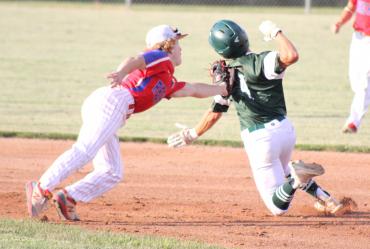 Only one team could stop Post 354 this weekend as the host Red Hawks looked to win their home regional tournament.

That team was Prairie du Chien, which earned a walkoff win over the Red Hawks in their first game on Friday before ending the hosts’ season and winning a regional title in the double elimination event on Sunday to send the Hoppers to state.

Post 354 mixed in wins over Whitehall and Mauston between the losses.

The Red Hawks snagged a lead late in their tournament opener on a three-run double from Owen Eddy in the bottom of the sixth inning and were sitting in prime position to start the tournament strong.

But the eventual regional champions had other ideas, loading the bases in the bottom of the seventh inning and scoring three runs of their own. A Ty Wagner single brought home the walk-off run.

Prairie du Chien took the lead in the first inning and G-E-T tied it in the third before the teams traded late flurries. Eddy tied with Zach Grams and Warren Stoner for the team lead in hits with two, and the Red Hawks finished with nine total.

Thirteen runs in three innings made a quick and easy game of Saturday’s opener for the hosts. Mauston scored all four of their runs in the bottom of the third inning.

Brady Seiling had a pair of triples and scored three runs for the Red Hawks, which got eight hits out of seven players.

Thomas Haney got the start for the Red Hawks, allowing one hit in one inning before Ben Hansen took over. Hansen finished with four strikeouts and three walks while giving up five hits.

A big fifth inning put the finishing touches on a rout over nearby Whitehall during the Red Hawks’ second game on Saturday.

Post 354 scored eight runs in the fifth to reach double digits on the scoreboard. Eddy and Stoner both had a pair of hits for G-E-T, and eight different players scored.

Stoner pitched for G-E-T, striking out seven and walking three. He allowed two hits in the effort.

Brock Sluga scored the lone run for Whitehall after Bryce Schorbahn drove him in with a line drive to center field.

Three pitchers saw time on the mound for Whitehall, combining for 10 walks and five strikeouts.

An early lead wasn’t enough for the Red Hawks to reach the legion state tournament and get revenge on Sunday.

The Red Hawks scored three runs in the first inning behind singles from Seiling, Stoner and Hansen. Seiling led G-E-T with two hits and the team finished with five as a group.

Prairie du Chien responded with an offensive rush of their own, scoring six straight runs before a late push from the Red Hawks fell one run short of tying the game.

Thomas Haney got the start for G-E-T, allowing nine hits and six runs in six innings of work. He finished with two strikeouts.