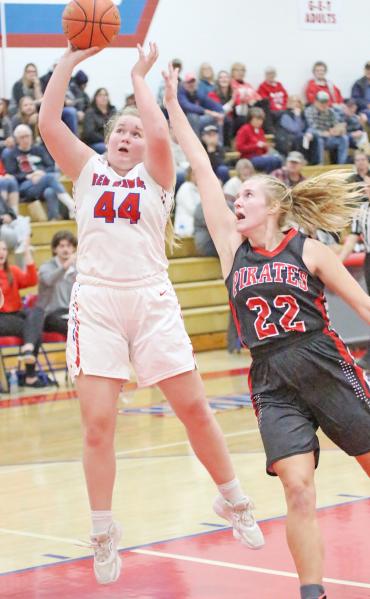 The Red Hawks fell at the hands of Cochrane-Fountain City in the season opener on Tuesday before dropping game two to Melrose-Mindoro, 65-34, on Thursday. No further information from that game was reported to the Times.

Turnovers and a big second half from the visitors changed the tune of the season opener on Tuesday. Coach Louis Hurd said he could have done a better job preparing his team and felt there were some early jitters due to inexperience.

“We don’t have a lot of experienced players right now. Learning how to win is going to be the No. 1 goal every game and learning how to play in pressure situations. … but it’s up from here,” he said.

The Red Hawks fought through the first half and trailed by seven at halftime. Point guard Shayna Kirkey had 11 points in the first half alone, and her coach said the senior did a “phenomenal” job with the ball. But the Red Hawks might need to move the ball handling around to keep everyone prepared and other teams on their toes.

“Most of the turnovers tonight were because we were not able to flow into our offense and everyone was kind of waiting for Shayna to run the show,” Hurd said. “Going forward it’s going to have to be collective.”

The Pirates came out flying in the second half, but the hosts kept the game within reach until missed opportunities swung the momentum for good. The visitors attacked more in transition and speed in the second half while also capitalizing on rebounds.

“We missed some shots, we had some turnovers up top. Anytime that happens, it’s off to the races,” Hurd said. “They made three or four of those plays and it made the difference. It ballooned and we couldn’t really recover.”

Kirkey finished with a team-high 13 points for G-E-T, and Navaeh Becker hit a trio of threes to add 12 points of her own.