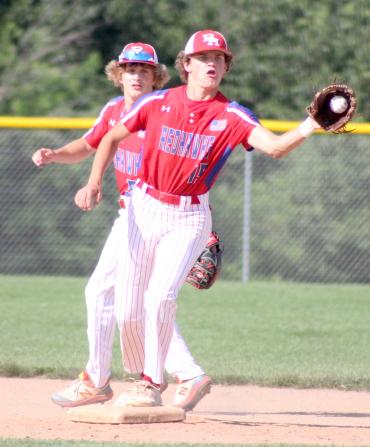 Cole Williams watched the ball to his glove at second base for Red Hawk Post 354 in game one of a doubleheader against Whitehall last Tuesday. The Red Hawks won both games.            (Times photograph by Benjamin Pierce)

Red Hawk Post 354 won both games in the doubleheader by double digits. The Red Hawks open regional playoffs on Thursday and Whitehall was slated to host Osseo for their regular season finale Tuesday before the tournament begins on Thursday.

G-E-T will host the regional and plays Prairie du Chien in the first round at 7:30 p.m. on Thursday. Whitehall will compete in the same regional, hosting Mauston at 5 p.m. the same day. The losers of those two games will play each other at 5 p.m. on Friday with the winners playing at 7:30 p.m. Play in the double-elimination tournament continues through the weekend with the championship scheduled for 3:30 p.m. on Saturday with a possibility of another game at noon on Sunday.

After Post 354 snagged a three-run lead in the first inning, Whitehall appeared to put themselves back into the game in the top of the fourth inning of game one.

Whitehall’s Brock Sluga stole third base on a wild pitch from Post 354’s Thomas Haney, stealing home on an error at the plate shortly after to get the visitors on the scoreboard.

But the hosts put a quick stop to any hope for Whitehall, getting the run back in the bottom half of the inning before bursting for six more runs in the fifth. Post 354 had its way with Whitehall pitchers Brayden Lisowski and Bryce Schorbahn, stacking up nine hits and eight walks for 11 earned runs.

Sluga led Whitehall on offense with a 2 for 3 day, while G-E-T got the same 2 for 3 performances from Zach Grams and Jack Beedle. Beedle led all players with a trio of RBI.

Game two was not as close.

Post 354 stacked up 10 runs in just three innings while allowing a lone hit to Whitehall.

A Brady Seiling triple was the highlight of the first inning as G-E-T built a 2-0 lead. After loading the bases to open the second inning the Red Hawks  garnered five runs to take a commanding lead.

The Red Hawks added three more runs in the third to end the game and earn the sweep. Caleb Williams knocked in three runs for Post 354, and Grams finished a perfect 3 for 3. Beedle and Seiling split the pitching duties, combining to throw four strikeouts and two walks.

Broc Coburn had the lone hit for Whitehall, which allowed seven hits in the effort. Luke Mateika and Sluga split pitching duties and finished with eight earned-runs-against to go with seven walks and four strikeouts.