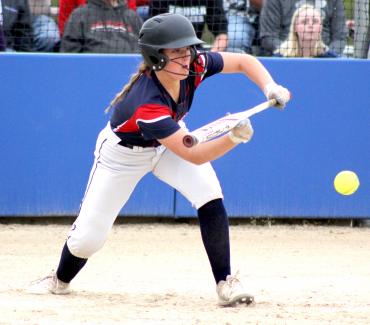 All season long, the Gale-Ettrick-Trempealeau High School softball team has been one of the area’s most aggressive teams on the basepaths.

In last Tuesday’s regional semifinal game against sixth-seeded Neillsville, though, the Red Hawks got caught being a bit too aggressive in the first inning. Senior Lindsey Lettner was caught stealing home before a fly ball led to a double play in the next at-bat.

But senior Ryann Duffenbach calmed things quickly for G-E-T, blasting a home run over the center-left field wall in her first trip to the plate to open the bottom of the second inning.

The home run was the tone-setter in what ended as a 6-1 win for the third-seeded Red Hawks.

“When we need a big hit, it’s Ryann,” coach Dan Stuhr said after the game. “Whether it’s a home run, a single, a double–whatever it is, a hit or a game-winning thing–that’s Ryann. In the second half of the season she’s probably been the best hitter and definitely our biggest clutch hitter.”

Second-seeded Baldwin-Woodville ended the Red Hawks’ season on Thursday in a 6-0 loss.

After Duffenbach’s home run on Tuesday, G-E-T gave up two quick outs with runners on second and third before the Red Hawks went back to their baserunning to pull away. Senior Melissa Flynn stole home on a passed ball, and a Kaitlyn Gunderson single scored Lettner in the next at-bat to make it 4-0.

The two-out offense for the Red Hawks has been a strength up and down their lineup, Stuhr said.

“That is huge, and we’ve been doing that all year. … Scoring with two outs, it’s demoralizing for the other team. I mean, I know I’m not happy when we give those up.”

It wasn’t pitcher Genna O’Neill’s best statistical performance of the season when it comes to strikeouts–she finished with five–but the senior was picking her spots and catching Neillsville with off-speed and placement. She held the visitors to three hits.

As the playoffs progress and stronger offensive teams are in the batters’ box against G-E-T, that bodes well for the Red Hawks, Stuhr said.

“Gen pounded the strike zone. .. and they didn’t hit many balls. That’s telling me she’s changing speed, she’s keeping them off balance, and the girls are making plays. The fact that we don’t have to win by striking everybody out is positive, it’s a confidence thing for the kids to have more than one way to win.”

Lettner batted 3 for 4 to lead G-E-T while Kaitlyn Gunderson and Melissa Flynn added a pair of hits.

Ahead of last Thursday’s game against second-seeded Baldwin, Stuhr believed in his team while saying the message continued to be focusing on what they can control and taking the postseason one game at a time.

“We talk and say, ‘This is the first game, and we’re gonna have to win four games and then we’ll get to state and see what happens.’ And when I say that, they nod their heads and they get that that’s the task,” he said. “We’re ready for it.”

The Red Hawks’ hopes of a long postseason run were ruined by one of the strongest regionals in the state on Thursday as G-E-T fell to the Blackhawks (17-5) to end their season.

After taking the 1-0 lead in the bottom of the fourth inning, the Blackhawks tacked on five more in the sixth to take full control of the game. O’Neill allowed five hits and two earned runs, striking out five and walking three.