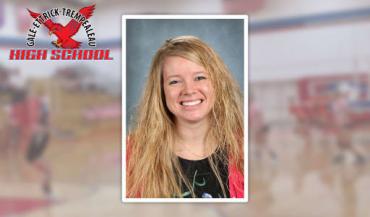 The Gale-Ettrick-Trempealeau High School volleyball program didn’t have to go far to find its new leader.

Jessica Weiler will take the reins of the varsity team after being the junior varsity coach last season.

Weiler has been around volleyball since she was a child, she said in a post on the district website. She played through high school and has coached at numerous levels. She spent six years as a middle school coach.

Weiler takes over a program that finished the year without a head coach after Kate Kubicek stepped down from her role as coach in late September. The Red Hawks finished the season with athletic director Rick Schmidt and former high school principal Troy White as its varsity coaches.

The Red Hawks finished the 2021 season with a first round exit in the regional playoff bracket and a 3-11 record.

In her post, Weiler said she believes in the team’s coaches and players and she looks forward to her first season leading the team.

“With a solid nucleus to build around at the varsity level, along with some talented underclassmen coming up, we look forward to a new chapter of G-E-T volleyball,” Weiler said. “Our coaching staff has big expectations for our program and the players who comprise it, on and off the court. We will work hard to not only build strong and competitive teams at all levels, but outstanding individuals.”

Weiler is one of two new volleyball coaches in the Times coverage area as Tasha Becker has taken over the Blair-Taylor program, replacing Jessica Kish.