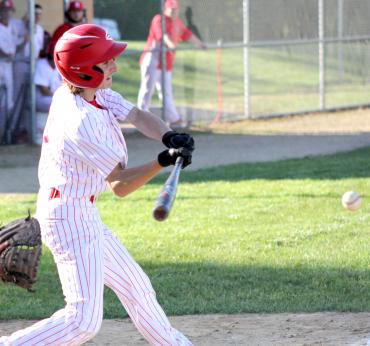 Brenden Brady belted a single in the bottom of the fourth inning of a regional semifinal at G-E-T High School last Tuesday to score a run and help the Red Hawks overpower La Crosse Logan 14-4.            (Times photograph by Benjamin Pierce)

As Owen Eddy stretched and prepared for a Wisconsin Interscholastic Athletic Association regional semifinal baseball game last Tuesday, his coach sought him out to deliver some direction that was atypical from a normal pregame chat.

Coach Scott Hovell sensed his team was playing too “tight” in its 2-1 walk-off win over Sparta in the playoff opener, and he wanted Eddy and a few of his teammates to crack some jokes and keep things light.

They were still focused, but it helped guys not to dwell on the pressure of a playoff game, he thought.

And as Eddy jotted by third base after poking a home run over the center-field fence to crack open a comfortable lead in a 14-4 win in five innings over La Crosse Logan on Tuesday, it wasn’t hard to see that the junior and his teammates were having plenty of fun at G-E-T Middle School.

“I pulled aside a few of my guys that are just goofy personalities that keep us loose,” Hovell said, “and I just said that’s gonna be huge for us today. I need you guys to just be you and be goofy and make guys laugh in the dugout and stay loose. ... guys were locked in today and it was just a lot of fun.”

Eddy was mobbed by teammates on a night he batted a perfect 3 for 3 including the three-run shot in the second inning along with a double and a triple. He finished with a game-high six RBIs against the third-seeded Rangers (11-11 this season).

The win preceded a regional final loss to top-seeded Altoona on Wednesday to end G-E-T’s season. The Red Hawks finished with a 16-8 record.

“I said, ‘I don’t care if you strike out four times, I need you to just be Owen and be goofy and keep guys loose’,” Hovell said of talking to Eddy ahead of Tuesday. “So maybe just that mentality helped him out a little bit right away. He had a couple of really nice pieces of hitting.”

A pair of walks to open the second inning put the Red Hawks in scoring position and were followed by a sacrifice fly from Zach Grams and an RBI single from Jack Beedle.

Eddy hit his home run the very next at-bat.

“I was just trying to hit the ball hard on a line,” the junior said. “There was a lot of wind today, so (I’m) trying to get the ball up in the air and carry it outta here.”

It was Logan that got the first laugh on Tuesday, though, as the visitors’ waited for G-E-T pitcher Collin Handke’s pitch and flew it over the fence for a 2-run shot in the first inning.

The Red Hawks responded in the bottom half of the inning, evening the score at two on a double from Ethan Stoner. Keeping things light was especially helpful after conceding a lead in the game’s first few at-bats, Hovell said after the win.

“After we recorded the third out in the first inning defensively our guys came in and right away, they’re like, ‘Alright, let’s go get a few here and get right back in it.’ And they were positive,” he said.

Beedle finished 2 for 3 with an RBI, and Brenden Brady had a pair of hits, too. Handke allowed five hits and two earned runs to pick up the win, striking out two and walking three.

Facing a 4-run deficit in Wednesday’s regional final in Altoona, G-E-T had the tying run in the batters’ box.

The Red Hawks had the bases loaded in the bottom of the sixth inning down 4-0. The Railroaders secured the final out of the inning after conceding just one run, and the score would stand as final.

Altoona (21-3) got all four of its runs in the bottom of the fourth inning and held G-E-T to just two hits. Thomas Haney pitched for the Red Hawks and allowed four hits while tossing four walks.