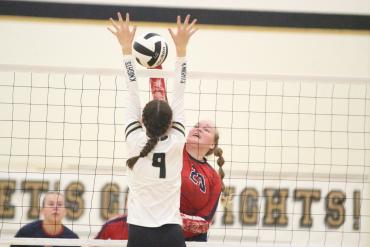 Before the opening serve flew across the net last Tuesday, the Gale-Ettrick-Trempealeau High School volleyball team knew they were in for a fight.
The Red Hawks made the most of that fight, earning what coach Jess Weiler called a “scrappy” Coulee Conference win at Onalaska Luther. Weiler and G-E-T also played in a tournament in Sparta on Saturday, but results were not posted. The Red Hawks (2-1 Coulee Conference) were scheduled to keep conference play going this week, hosting West Salem on Tuesday as well as Viroqua on Thursday.
"We knew it was going to be tough,” Weiler said of the 3-2 triumph over Luther. “We have to battle, we're a scrappy team. A lot of balls that would have normally dropped we were able to at least get a hand on and just keep them up. It was just a big conference win, so we'll take it.”
G-E-T 25 10 22 25 15
Luther 20 25 25 19 11
Luther held a slim lead early in the opening set, but G-E-T went on a run to take a 17-13 lead. After the hosts cut that lead to two points, the visitors scored three straight points to win 25-20.
The second set, though, was not as kind to the Red Hawks in a 25-10 loss.
"We tensed up,” Weiler said. “One of the things that we work on is just not getting too tense or too rigid with passes, swings, getting in our own heads. But I'm really proud of how they came back and battled after that second set not looking so great.”
And battle back they did—The Knights came out flying in the third set before G-E-T again came back to make it close. Luther prevailed with the 25-22 win, but a late push in the third gave the Red Hawks enough energy to win the fourth set.
"We've been talking a lot about the mental aspect of we can't get too high, can't get too low and just staying mentally strong. So we've really worked a lot of that in practice the last few days on just coming back mentally tough.”
Prior to the fourth set, Weiler said she reminded her players to stay within themselves and focus on what they can control. The priority was receiving serves and avoiding errors when it was their turn to serve the ball, too.
Elyse Schoonover made her presence felt in the fourth set, collecting seven kills. She finished the match with a team-high 18 kills.
"Volleyball is always a game of mistakes and making fewer on our side obviously gets us those points,” she said.
There were few mistakes in the fifth and deciding set, one that gave G-E-T the match win after the Red Hawks again closed the set despite Luther trying to claw back into the game.
Kayla Schultz led G-E-T with 22 assists, and Kaylee Hauge added 14.