Red Hawks take one of three in Coulee 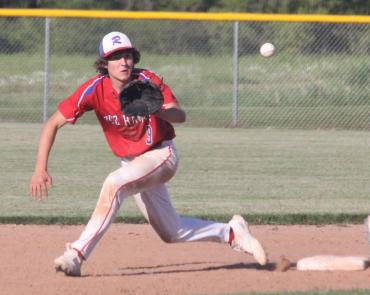 The Red Hawks split a doubleheader with Westby on Thursday, after falling handily to West Salem on Monday. They ended the week with a 23-2 nonconference loss to La Crosse Logan, for which stats were not provided by press time.

The losses drop G-E-T to 6-9 overall on the season, including a 5-6 Coulee Conference record. Their regular season was scheduled to conclude Monday at Arcadia. The Red Hawks were also awarded the fourth seed in the Wisconsin Interscholastic Athletic Association Division Two regional tournament, earning them a Thursday rematch with Logan in the opening round.

The Panthers jumped on the Red Hawks in the middle innings to take a six-inning win at G-E-T last Tuesday.

Red Hawk starter Thomas Haney struggled with the top of the Panther order, allowing eight of his 11 hits surrendered to the top five spots in the lineup.

West Salem jumped ahead with a one-out RBI single in the first inning, before expanding their lead in the third inning. After retiring the first batter of the inning, Haney allowed four straight hitters to reach on a walk and three base hits. The latter two each drove in a run, which preceded a sacrifice fly and a third RBI single that made it 5-0. Ethan Stoner drove in the lone G-E-T run in the bottom half of the inning, grounding a single up the middle to score Warren Stoner.

The Panthers scored in each of the remaining innings, tallying three in the fourth, two in the fifth and one in the sixth to clinch the mercy rule victory. Five G-E-T errors in the field also prolonged several innings as the Red Hawks were unable to keep things close in the late going.

An early lead gave way to a close defeat in game one of the Red Hawks’ doubleheader Thursday against Westby.

G-E-T loaded the bases with two outs in the bottom of the first, before Tyler Seiling drove home the first run of the game with a base hit. Two other runs scored on an error and a wild pitch as the Red Hawks led 3-0 after one. Westby responded with two runs in the top of the second, before Jack Beedle tallied an RBI single in the bottom of the second to move the lead to 4-2.

The Norse tagged G-E-T starter Ethan Stoner for three runs on a two-run triple followed by an RBI single to take the lead in the top of the third. After a scoreless bottom half of the inning for the Red Hawks, Westby put together a two-out rally to score two more on two walks and two base hits to move the lead to 7-4. A one-out double by Collin Handke came around to score for G-E-T in the bottom of the fourth, but the Red Hawks went hitless and stranded two runners the rest of the way.

Stoner took the loss on the mound, allowing 10 hits and three walks leading to the seven earned runs. Riley Kirkey finished the game on the mound, pitching three scoreless innings with two hits allowed. Beedle led hitters for G-E-T with two of the team’s six hits, a walk, a run scored and an RBI.

A three-run fourth inning helped the Red Hawks hang on late to split the doubleheader with Westby.

G-E-T entered the fourth at a 2-2 score after an RBI single by Brady Seiling in the first inning and another by Owen Eddy in the third to tie the game. Three-straight errors on infield grounders by the Norse allowed Warren Stoner, Beedle and Ethan Stoner to reach, with the last of the three also allowing Warren Stoner to score as G-E-T took the 3-2 lead.

After an Ethan Stoner steal put runners on second and third, Brady Seiling hit an infield single to drive in the second run. Handke grounded out to shortstop to drive in the third run of the inning, capping a 5-2 score that held until the bottom of the sixth.

Handke had an effective outing on the mound, but ran into trouble as the first two reached on a walk and single in the sixth. A fielder’s choice and a pickoff helped G-E-T avoid the big inning, but an RBI single pulled Westby within two. Kirkey came on for the save in the seventh, and promptly had the tying runs on base after a single, passed ball, sacrifice fly and a walk put runners on first and third. A stolen base put both runners in scoring position, and an RBI single also put the tying run on third with Westby trailing 5-4. A lineout to Handke at third for the second out thwarted any sacrifice opportunity, and Kirkey induced a fly out to second to secure the save.

Handke took the win with six innings pitched, three runs including one earned, five walks, six hits and two struck out. Beedle, Handke and Brady Seiling each had two of the team’s eight hits. Beedle scored twice and walked, while Seiling drove in two and Handke scored once and drove in one RBI.