Schweisthal retires after 35 years at Arcadia 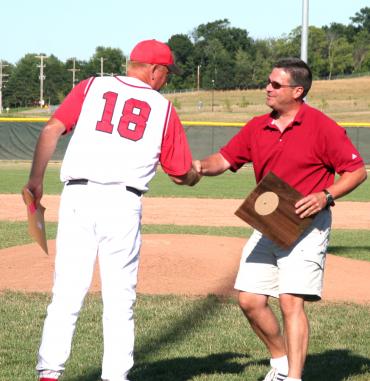 Bruce Schweisthal was a graduate student occupying a long-term substitute position in Whitehall when he was offered a job teaching in Arcadia.

In the 35 years since, offers to join other districts have come up, but Schweisthal could not imagine going anywhere else.

“I just could not leave. I fell in love with the area and town,” Schweisthal said. “What drew me was the job, what kept (me) was the great people and the great staff; that turned it into a career.”

Schweisthal was named the school’s athletic director 24 years ago and was named the Wisconsin Athletic Director Association’s District Three AD of the Year in 2019.

Over his tenure, Schweisthal channeled that passion into addressing the needs of student-athletes in conjunction with the efforts of the teaching and administrative team at Arcadia. He was also quick to acknowledge the efforts of donors large and small over the years that have helped Raider student-athletes get the most out of their experiences in the district.

“I mean the generosity over the years...three press boxes, dugouts, turf football field, storage buildings, the Wanek Center, on and on,” Schweisthal said. “Grass roots donations and major donations from the Glen Reit family and the Ron Wanek family. Very impressive and we are so appreciative of all donations over the years.”

Schweisthal was a mainstay on the sidelines of all manner of sporting events both in Arcadia as well as on the road, but he claimed no favorites when asked about his favorite teams. He said while respected the vigor involved with all sports, two he gained the most appreciation for were cross country and wrestling.

“I’ve told people that if you cross the finish line in cross country and you feel good, you have not done cross country yet,” Schweisthal said. “Wrestling, wow! Total respect. Consider the required weight management and then to go out on the mat and battle someone one-on-one for six minutes...I’ve watched matches and I was exhausted after just watching them.”

Schweisthal’s greatest satisfaction on the job however was seeing kids grow into their own through participation in sports. He hoped to see schools and the Wisconsin Interscholastic Athletic Association (WIAA) emphasize balance on and off the playing fields in the future.

“If our high school sports are removed from schools and become club-based, I think we will lose the homegrown, hometown sports teams that provide that entertainment and pride that bonds each and every community,” Schweisthal said. “I am hopeful that the school leadership and the WIAA continue to promote non-specialization of athletes, proper balance between athletics and academics and multi-sport athletes.”

In retirement, Schweisthal hopes to spend more time with family and see a fresh face inject new ideas into the district. He plans to stay in the area and attend games as well, but figures it will be an adjustment not to have the usual concerns of an athletic director on his mind.

“It will be hard to imagine not worrying about whether officials show up, the scoreboard works, workers arrive, the weather cooperates, and everything goes smoothly at an event, but I will give it a try,” Schweisthal said. “I love the town and the people. It has been an honor to serve them for 35 years.”