Second half push not enough for Arcadia girls in hoops opener 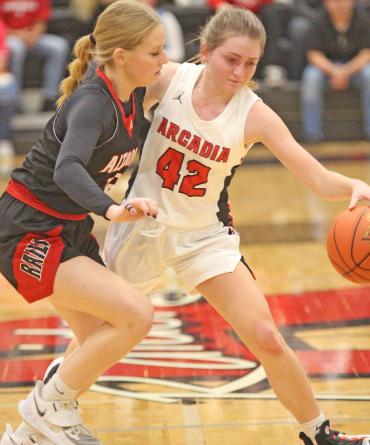 Justine Sonsalla fought off an Altoona defender in the first half of the Arcadia girls basketball team’s season opener last Thursday at Arcadia High School. The Raiders fell to Altoona 70-50 despite a second half comeback bid.   (Times photograph by Benjamin Pierce)

Despite the final spread showing a 20-point loss for the Arcadia High School girls basketball team in its season opener last Thursday, coach Evan Pagel came away with a plethora of positives to build on.

Altoona, a team that fell just one win short of a trip to the state tournament last winter, opened on a 13-2 run at Arcadia High School on Thursday and held an 11-point advantage at halftime.

But the hosts wouldn’t go away quietly, utilizing the free throw line along with multiple outside shots from senior Breah Golden and inner pressure from junior Casidi Pehler to pull within four points of the visitors with six minutes to play.

A 52-48 score was as close as Arcadia would get, dropping the game 70-50. The Raiders were scheduled to host Cochrane-Fountain City on Tuesday.

“Do we just give in because we’re getting punched in the mouth right now? No,” Pagel said of his halftime chat with his group on Thursday. “Breah did a better job dishing the ball. We looked inside to Casidi, and that was a big emphasis, too.”

Golden finished with a game-high 27 points for Arcadia, and Pehler added 12. Failing to corral rebounds throughout the game hurt Arcadia, and late fouls allowed Altoona to pull away for good.

On offense, Pagel wants his team to be a bit quicker with their decisions than they showed in the opener.

“We were catching it and pausing for a second or two. We’ve got to make that decision a lot quicker. It lets the defense close out on us, get in position. So we need to put the pressure back on them,” he said.

Defensively, Arcadia will shift between a zone and man coverage depending on who they play. Against a strong Altoona team with multiple capable guards, they adapted a bit throughout the game.

Altoona had a significant size advantage and they used it well on Thursday to fight to the basket and win the rebound battle while drawing fouls along the way. Three different players scored at least 15 points for Altoona, including a team-best 21 from Division 1 University of Minnesota commit Alyssa Wirth.

“We want to take away the strong side of the court and force teams to have to make that long pass. And then we’ve got athletic guards that can go and read that,” he said.

The team’s record shows 0-1, but Pagel said his group can work with the season opener.

“Its something to build off of. .. This is is a solid team and people picked them to be at state,” he said. “To be down four well into the second half, that’s what we’ll be happy about. Now we’ve got to work on closing it out.”