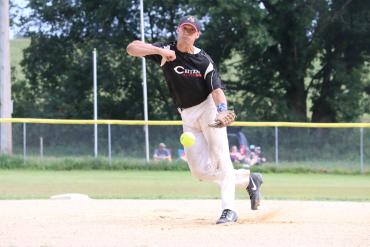 Matt Stuhr of Ffats Brewing Company delivered a pitch during the opening game of the fastpitch softball tournament held in Pleasantville last Friday and Saturday.            (Times photograph by Andrew Dannehy)

A win over Ffats Brewing Company made it a clean sweep for Striker’s Lanes, out of Baldwin as they won two tournaments played in Pleasantville this year.

The first win for Striker’s came in the annual Pleasantville Fourth of July tournament. The most recent was last Saturday as they defeated the host team in a tournament that would typically be played in Whitehall the weekend of Beef and Dairy Days, had the annual celebration not been cancelled due to the COVID-19 pandemic.

Dan Ducharme of Striker’s out-battled Ethan Ringlien for a 2-1 win.

Ffats took a 1-0 lead in the fourth when Gary Sartor doubled and was brought home when Ringlien doubled. But that’s the only offense Ffats could manage.

Zach Campbell tied the game with a two-out RBI single in the fifth. J.R. Dachel reached on an error in the sixth and scored on a double by Ducharme.

East End defeated Shamps Bar 4-2 in the consolation game with John Kupka getting the win.

Strikers had three members on the all-tournament team with Campbell and catcher Jeff Newton joining Ducharme.

Infielder Sartor and outfielder Jared Burt joined Ringlien on the team for Ffats. Isaac Skoyen represented Johnson Hardware and Rental, Rob Herman made the team for Pleasantville, Shamps was represented by Trevor Hammer and Haines was picked for East End.