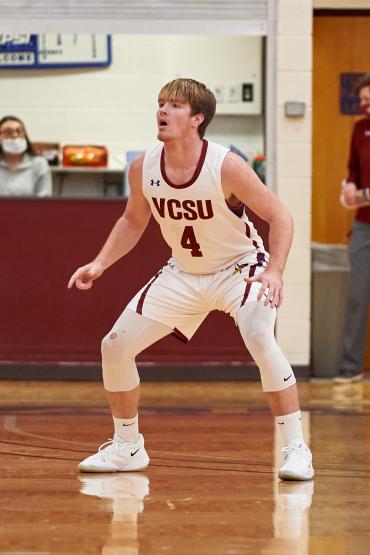 Gale-Ettrick-Trempealeau class of 2018 graduate Chris Thompson was recognized at the beginning of this month as the North Star Athletic Association’s (NSAA) Defensive Player of the Year.

The Valley City State University junior tallied 44 steals and eight blocks to highlight his 2020-21 season on the defensive end. Thompson also set a new school record with a nine-steal effort in a 100-76 win over Baptist Bible College on Nov. 21, 2020. The Vikings finished their season 19-7, losing in the NSAA Tournament Semifinals. Vikings head coach Ryan Montgomery said Thompson has evolved into a “complete player on the floor” as a starting guard for his team.

“Chris is an athletic player who provides a lot of ability in our pressing style. His ability to read offensive players and find steals with traps is essential to what we do,” Montgomery said, adding that Thompson has been unselfish and a leader to younger players.

Thompson also saw his points per game increase from 8.2 in his sophomore campaign to 9.4 this past season. He transferred to VCSU in North Dakota from Bryant & Stratton College in Wauwatosa after his freshman season. Montgomery added that there is still room for Thompson to grow in his final season.

“Chris can do many things offensively, but I believe him finding a niche defensively has helped him find his identity,” Montgomery said. “We believe if he takes the next step, we will have one of the best to put on the VCSU uniform.”

Tim, Nick and Lexi Wagner have each continued to progress in their respective basketball careers over this past year.

Tim and Nick are currently both at Bemidji State University in Minnesota, where Nick just finished his junior season and Tim is in his second season as an assistant coach. Both joined the program prior to the 2019-20 season after Nick transferred from Indian Hills Community College.

Nick made an immediate impression from deep, setting the BSU school record for single-season three-pointers made (80) and attempted (195) in 2019-20 in 27 games. He has started each of the team’s 43 games since arriving on campus. The Beavers finished 7-9 this past season.

Lexi returned to the floor for Youngstown State University in Ohio after losing her freshman season to an ACL injury. She appeared in 16 of the Penguins’ 18 games, averaging 1.6 points per game.