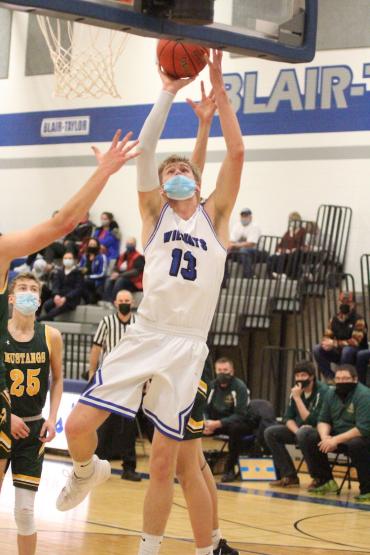 Matthew Waldera of Blair-Taylor was named to the All-Dairyland Conference first team after finishing near the top of the conference in scoring and rebounding.

The teams were voted on last Wednesday with Matt Waldera and Kyle Steien both earning first-team honors. The senior duo were the top two scorers and rebounders in the DC-Large Division. Steien led the conference with 21.8 points per game with Waldera second at 17.8; while Waldera was the top rebounder at 9.8 per game to Steien’s 8.8.

The two led B-T to a 10-0 mark in conference play and they advanced all the way to the Wisconsin Interscholastic Athletic Association Division Four sectional final where they lost to Onalaska Luther.

Also earning first-team honors was Whitehall’s Devon McCune, who averaged 11.9 points per game for the Norse, which finished tied for third in the DC-Large at 5-5. McCune was the youngest player named to the first-team and one of only two non-seniors with Tristen McRoberts of Melrose-Mindoro being the only junior named to the team.

B-T, Whitehall and Independence were honored on the second-team.

Reismann was second in the conference, averaging 4.7 assists per game to go with a scoring average of 10.7.

Beighley averaged 9.6 points and 5.2 rebounds for the Norse. He and McCune were the only sophomores to earn all-conference honors.

Killian was Independence’s lone representative after finishing second in the DC-Small with an average of 18.3 points per game and he was fifth in rebounds, averaging six.