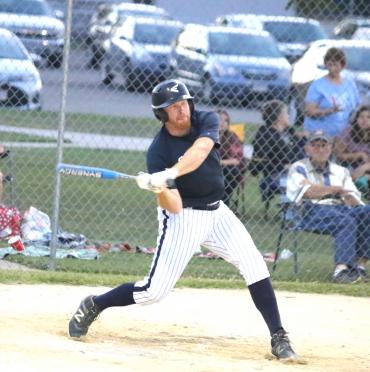 It looked as if Wason’s was going to be in trouble despite finishing the regular season unblemished. They trailed Ffats Brewing 4-1 with two at-bats left, but rallied for the win.

The rally started with three runs in the bottom of the sixth. It ended one at-bat into the seventh as Tony Meidl blasted a leadoff home run to centerfield to give his team the win and the league championship.

Meidl was three-for-three for Wason’s while Ben LeFluer pitched them to the win.

Ethan Ringlien took the loss for Ffats, but helped the team advance to the championship by pitching a shutout against Weiner’s Bar in the semifinal game earlier Thursday evening.

Ringlien allowed three hits and struck out 16 as he kept his team in the game, despite a lack of offense.

The game was tied 0-0 through regulation and it wasn’t until the top of the eighth that Helgeson led off with a single, moved to third on a single by Rob Herman and scored on an error hit into by Drew Anderson.

Ringlien then struck out two of the three batters he faced in the bottom of the eighth for the win.

Herman and Anderson both had two hits for Ffats.

Matt Stuhr took the loss for Weiner’s, despite striking out 19 batters. He allowed eight hits, two of which came in the eighth inning.