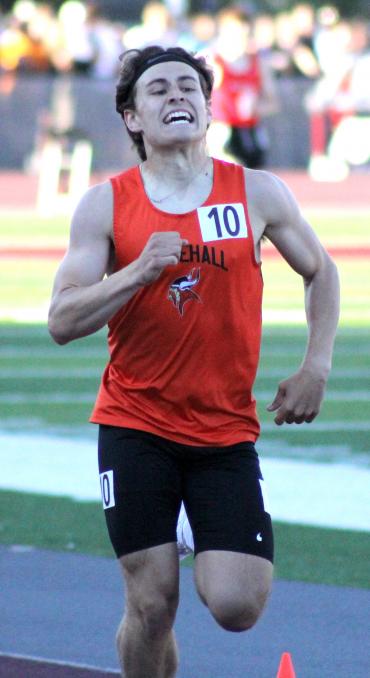 Kevin Carroll set a new Whitehall school record in the 800 as he finished sixth at the state track meet on Friday.            (Times photograph by Benjamin Pierce)

“I just started crying because that was my goal this whole time was just to get it (the record) because I just didn’t have much time to get to that,” Carroll said, “I finally got it, and I just broke down. And then to be sixth as well, that kind of made it hit home further.”

Kevin Carroll threw his head back and launched his hands toward the sky, turning to face the small — but louder than most others around them — Whitehall fan section in the front row at the WIAA state track and field meet on Saturday at University of Wisconsin-La Crosse.

Tears welled up and the Whitehall senior let them flow as he hugged competitors just after breaking the school record and reaching the podium with a sixth place finish in the 800-meter run.

Carroll has aimed for the school record since last year, and his time of 2 minutes, 0.27 seconds was enough to break the old record by about half a second. The senior was seeded 10th and was primarily focused on breaking the record, he said.

“I said if I could get last but still get the school record, that’s all I’m aiming for. I didn’t expect to podium, so I was excited that I finally made it. It kind of just shows that my hard work has paid off,” Carroll said.

His emotional celebration was initially about the record, a feat that became possible after spending last winter running at the Wanek Center in Arcadia and working with a personal coach to round out his form. He quit basketball, which he loves, to spend more time on training.

Training included hip work and speed training over endurance while spending time on flexibility, too in daily practice.

So when Carroll saw that his record was enough to reach the podium, too, it was a lot to take in.

“I just started crying because that was my goal this whole time was just to get it (the record) because I just didn’t have much time to get to that,” Carroll said, “I finally got it, and I just broke down. And then to be sixth as well, that kind of made it hit home further.”

Coach Leah Trempe said she wasn’t surprised to see the junior jump from the 10th seed to a podium finish.

Watching his time drop from 2:09 at the start of the season to his record time this weekend was a process that she feels shows what happens when athletes work for their goals.

At the start of Carroll’s junior year, Trempe told him he’d be running 20 miles a week to prepare. He wasn’t sure about that, thinking he would be a sprinter when the season started. That same conversation this year went much different.

“Last year when I said it again before going into the season, he said, ‘Alright, let’s go. Let’s do it.’ And he really committed to that and trusted me and trusted the training that we were going to do, and this is the result.”