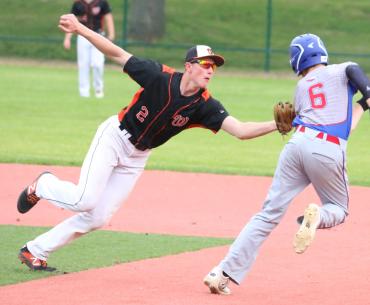 Devon McCune of Whitehall tagged out a Pepin/Alma runner during their game last Thursday.            (Times photograph by Andrew Dannehy)

Mercy-rule wins began and ended the week for the Whitehall baseball team as they were swept in a doubleheader against Pepin/Alma.

The Norse scored a 12-2 win over Eau Claire Immanuel Lutheran last week Tuesday before losing both games against Pepin/Alma on Thursday. They rebounded with a 16-3 win over Eleva-Strum on Friday.

The Norse begin Wisconsin Interscholastic Athletic Association play with a home game against (6) Cadott on Thursday. Whitehall is the third seed and would play at (2) Thorp/Gilman this coming Tuesday with a win. The winner of that game plays in the regional final next Wednesday.

The Norse took an early lead and didn’t let up as Isaac Skoyen batted in six runs in the game.

Skoyen got going early with a two-run two-out single in the bottom of the first inning.

The Lancers tied the game with two in the top of the third, but Whitehall pulled away from there.

Three runs in the bottom of third put Whitehall back ahead. The Norse worked for three walks and had two hits — including an RBI by Skoyen as they went ahead 5-2.

Four more runs in the fourth broke the game open and Whitehall put it away with there in the fifth.

Skoyen had three of Whitehall’s eight hits, batting in six runs. Nobody else had more than one hit.

Devon McCune got the win, holding the Lancers to five hits while striking out one without a walk.

The Eagles took an early lead and Whitehall couldn’t catch up.

The first two P/A batters reached base and came around to score in the top of the first. They added another in the second to go ahead 3-0.

Brock Sluga led off the third with a single and scored on a single by Devon McCune, but that’s all the offense the Norse could manage.

Whitehall had six hits in the game, McCune led the way going three-for-three, while Luke Beighley was two-for-two.

P/A added two more runs in the top of the fifth and Whitehall couldn’t respond.

Whitehall tied the game in the top of the fourth, but P/A retook the lead and the Norse couldn’t respond.

With runs in the first and third innings, the Eagle took a 2-0 lead. Whitehall erased that in the top of the fourth as Sonsalla hit into a fielder’s choice to score Zach George and Brock Sluga grounded out, plating Bryce Schorbahn and tying the game.

A leadoff walk came back to hurt the Norse, however. A sacrifice moved the runner to second before a single moved him to third and the go-ahead run scored on a wild pitch.

Trailing 3-2, Whitehall got the tying run on third as Devon McCune led off the fifth with a single, but he was stranded 90 feet away.

The Norse had five hits in the game as George and McCune both had two.

George was the starting pitcher as he allowed four walks and three hits with one strikeout. McCune replaced him in the third, allowing two hits and one walk while striking out one.

With five runs in the first inning, the Whitehall baseball team wasted no time taking control.

The first seven Whitehall batters reached base and five scored as the Norse opened up a 5-0 lead before the Cardinals stepped to the plate.

Whitehall added six more in the second inning to go ahead 11-0, but E-S responded with two in the bottom half. Both teams scored one run in the third, then the Norse added three in the fourth and one in the fifth for the lopsided win.

Beighley had two hits and four RBIs for the Norse while Blaha went two-for-four with three RBIs. George added two RBIs while Sonsalla, Eric Kleinhans and Brayden Lisowski had one. Whitehall had 12 hits in the game, in addition to Beighley and Blaha, Sonsalla, Sluga and George had two hits.