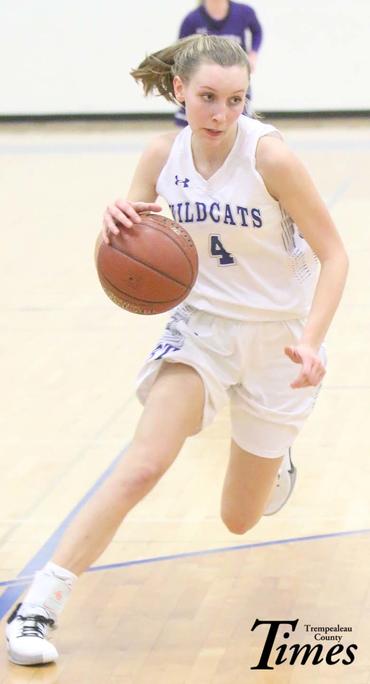 Marlee Nehring raced up the floor on a fast break for Blair-taylor during their game against Augusta last week Tuesday.

The Blair-Taylor girls basketball team split a pair of Dairyland Conference games while taking two of three overall for the week.

Blair-Taylor won handily over Augusta last Tuesday, before running into a buzzsaw at Melrose-Mindoro in a matchup of Dairyland Conference Small and Large leaders on Friday. The loss did not linger long for the Wildcats, who rebounded with a close win over Royall at Just a Game Field House on Saturday. The 2-1 week moves B-T to 10-4 overall, and keeps them at the top of the Dairyland Small at 7-2. Their week began Monday at Gilmanton in another Dairyland matchup, with their schedule ahead also including a Saturday contest at home with Ashton.

B-T 71 Augusta 48 - Strong first halves from Lindsay Steien, Chloe Wagner and Marlee Nehring helped the Wildcats out to a 40-19 lead they would not relinquish last Tuesday at home against Augusta. Steien's 14 points, Wagner's 10 and Nehring's eight in the opening half highlighted a commanding start for B-T. On the game, Nehring led scorers with 18 points for the game, followed by SteienÕs 16, Lauren Kidd and Wagner each with 12, Kierstyn Kindschy's seven, Abby Thompson's four and one each from Alivia Boe and McKenna Boe.

Mel-Min 99 B-T 52 - B-T fell behind 52-26 at half to a high-powered Mustang offense and were unable to come back in the second. Leading Mel-Min were Mesa ByomÕs 32 points, Emily HerzbergÕs 30 and Teagan Frey's 25. Nehring led the Wildcats with 19, followed by Steien's 17, Thompson's seven, Kidd with six and Chloe Wagner with three.

B-T 47 Royall 40 - The Wildcats bounced back in a defensive game Saturday at Just a Game Fieldhouse against Royall. B-T led 28-24 at half, led by 10 points from Thompson and eight from Nehring. They stayed ahead of the Panthers in the second half thanks in part to 10 points from Steien, who finished with 15 for the game. Thompson's 16 points led the Wildcats, with Nehring's nine, Chloe Wagner's five and Kidd's two rounding out the scoring.