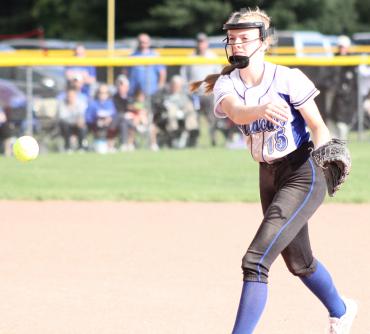 Blair-Taylor's Madalynn Frederixon lobbed an underhand throw to first base to secure an out during a WIAA Division 5 sectional final at Almond-Bancroft last Wednesday. The Wildcats lost 4-0 to Assumption.            (Times photograph by Benjamin Pierce) 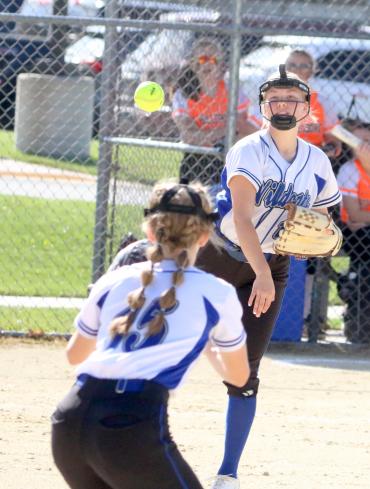 Blair-Taylor’s Abby Thompson threw to first for an out during their sectional semifinal game against Hillsboro last week Tuesday.            (Times photograph by Andrew Dannehy)

Chloe Wagner held on tightly with a bittersweet smile on her face as she hugged a teammate who couldn’t hold back tears Thursday evening on a softball diamond two hours from home.

A few feet away coach Greg Bratina consoled another Blair-Taylor High School softball player, reminding her that he was proud of her and the entire team despite its perfect season coming to an end.

The sting of Thursday’s 4-0 loss to Assumption — one that ended a 26-0 season to that point and prevented a repeat run to the state tournament for Blair-Taylor — in a Division 5 sectional final was felt deeply by the Wildcats, whose normally high-powered offense mustered just two hits at the neutral site of Almond-Bancroft.

“It just wasn’t our day,” Bratina told the Times after the game. “We did hit the ball fairly decent at times, but it was like every single one (was) right at the shortstop or a smoker at the pitcher, and even in the gap there they just didn’t drop for us today.”

Defensive issues played an even bigger role in the final score, as a single with a full count and two outs meant a 1-0 lead for the Royals in the top of the first inning. An error collecting a fly ball in the outfield in the third inning allowed Assumption to double its lead.

Defensive miscues have cost the Wildcats in the past, Bratina said, adding that it was the main reason for Thursday’s loss.

“That’s the difference, and that’s what’s always been the killer for us down at state a few times. ... it wasn’t like they were just routine (balls) that we dropped,” he said, “but you just can’t get let good teams get girls on and then get to second without even having to push them there.”

Blair-Taylor got a single from Abby Thompson and another from Wagner but otherwise couldn’t break through. Thompson pitched all seven innings, allowing six hits and three earned runs while striking out four and finishing with no walks.

The Wildcats were making solid contact with the ball throughout the game, but Assumption shortstop Claire Nelson repeatedly controlled hard-hit ground balls and the outfield made a few stretching catches, too.

Assumption pitcher Ava Schill snatched a bullet line drive off Blair-Taylor’s Lexi Lofgren in the bottom of the fourth inning, and the reactions spanned from disbelief to amazement.

A two-run home run from Maleia Kolo in the top of the seventh inning dwindled the chances further for Blair-Taylor, which couldn’t bring anyone home to end the game.

Bratina called it a frustrating loss but said he reminded his seniors that they finished their careers without a regular season loss and that the team still advanced to state in two of their three seasons.

“It’s tough right now but you’ll look back and you’ll have a lot of great memories, and you’ll remember how good this team was,” Bratina said. “I hope they hold their heads high because they’re keeping Blair Taylor softball strong and hopefully they’ve left a real good legacy for the younger girls.”

A Wagner home run got the Wildcats out of a scare in a sectional semifinal at home last Tuesday.

Wagner’s three-run shot put the final touches on a sixth inning that saw Blair-Taylor score four times to regain the lead. Hillsboro scored four runs in the top of the first and added two more in the second to match the Wildcats’ six runs in the bottom of the first.

The Wildcats had 15 hits, led by junior Lindsay Steien and Thompson, who each supplied three. They finished with five extra-base hits.

Thompson allowed 10 hits to nine strikeouts and finished without a walk.