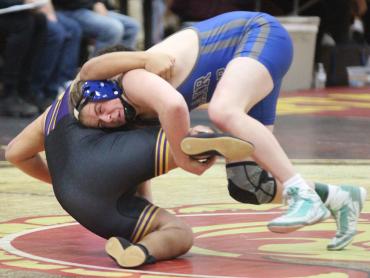 Bryan Rogstad of Blair-Taylor drove his opponent to the mat in his opening match at last Saturday’s invitational at Sparta High School. Rogstad pinned Harry Wolters of DeForest in the match on his way to a second place finish.        (Times photograph by Benjamin Pierce)

Despite not having enough wrestlers to compete in every weight class, the Blair-Taylor high school wrestling program still earned a sixth place finish at an invitational in Sparta on Saturday.

A first place finish from Jackson Shramek and a second place day from Bryan Rogstad played a big part in the successful day for the Wildcats.

Blair-Taylor was scheduled to visit Independence High School this Thursday to face the Melrose-Mindoro/Gale-Ettrick-Trempealeau Titans varsity reserve. The Wildcats are also scheduled to return to Independence on Saturday for an invitational.

Shramek won all three of his matches after a bye at 182 pounds, pinning Bennett Rhodes of Reedsburg in 3 minutes, 50 seconds in the first place match.

Shramek improved to 31-2 on the year with the wins.

Rogstad (195) pinned each of his first three opponents on Saturday, earning a second place finish. Luke Statz of Baraboo (8-0 major decision) was the only wrestler to beat Rogstad.

Flynn stacked up three major decision wins and one pin.

Colton Koxlien placed sixth in the 145-pound bracket, wrestling to a 2-2 record. Gunar Koxlien (152) was the final Wildcat to place, taking eighth with a 1-3 day to go with a bye.

The Blair-Taylor wrestling team won four of the six matches that were decided on the mat in a 45-18 win over Osseo-Fairchild/Augusta last week Tuesday.

The match included eight forfeits, including three double forfeits, four in favor of B-T and one that gave six points to OF/A. But the Wildcats still had a strong showing on the mat.

The Dragons scored the first six points with a forfeit and a pin by Cayden Guntner (126) over Easton Rogstad. Billy Miller (132) put B-T on the board with a 7-2 win over Bryce Armstrong-Baglien before Juan Lopez (138) and Ryan Flynn (145) both received forfeits for B-T.

The Dragons won the next match as Hunter Breaker (170) pinned Isaac Sturgal, but those would be the last points they’d get. Jackson Shramek (182) and Bryan Rogstad (195) both received forfeits before Dylan Elvaker (220) pinned Gryphon Brown to end the night.

The Wildcats were in action again on Saturday, wrestling in a tournament hosted by Sparta (see story elsewhere in Sports).