Wildcats pinned by Pirates in dual 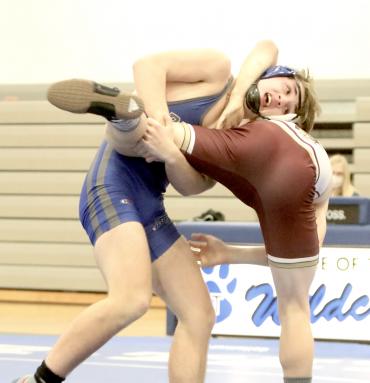 Ryan Flynn of Blair-Taylor shot for a takedown during their dual against De Soto last Tuesday.            (Times photograph by Andrew Dannehy)

Though they won three of the five matches that were decided on the mat, the Blair-Taylor wrestling team came away with a 54-15 loss to De Soto last week Tuesday.

B-T had to forfeit seven matches, including the first four as they fell behind 24-0. After a double forfeit at 132 pounds, Seth Greeno (138) of De Soto pinned B-T’s Gunar Koxlien to put the Pirates ahead 30-0.

The Wildcats got on the board when Ryan Flynn (145) secured a third period pin over Trenton Baldwin. After that, it was another B-T forfeit at 152 pounds before a double forfeit at 160.

A match that featured two of the top wrestlers in the area came out in De Soto’s favor as Aiden Brosinski (21-1 record) pinned Jackson Shramek (14-2) at 170 pounds. Brosinski scored a takedown in the first period before picking up an escape in the second and pinning Shramek in 4:52. Brosinski finished second in the Bi-State Classic in late-December.

The dual ended as it began with two B-T forfeits.

The Wildcats will be off until Saturday when they compete in a tournament in Ithaca.