Wildcats take one of three on diamond 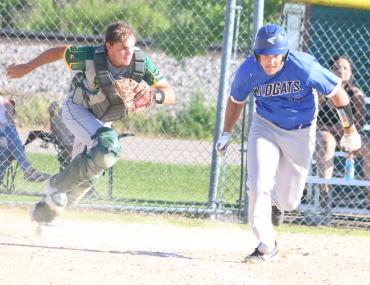 Eli Swenson of Blair-Taylor raced down the first base line after dropping a bunt during their game against Melrose-Mindoro last week.             (Times photograph by Andrew Dannehy)

Blair-Taylor baseball dropped two of three last week, despite their most productive week of the season offensively.

After dropping their opening game of the week 4-1 to Independence/Gilmanton (see story elsewhere in sports), the Wildcats exploded offensively with an impressive showing at the plate in a win over Alma Center Lincoln on Thursday. On Friday, another double-digit scoring effort kept things close in a game that slipped away late for B-T against Melrose-Mindoro.

The 1-2 week drops B-T to 7-9 on the season, with all of their games thus far also counting towards their Dairyland record. The Wildcats were scheduled for a doubleheader on Tuesday with Pepin/Alma at Alma, their final game of the regular season. B-T earned the fourth seed in the Wisconsin Interscholastic Athletic Association Division Four regional bracket, earning them a Thursday matchup with fifth-seeded Eleva-Strum in the opening round. The winner travels to face top-seeded I/G next Tuesday in the regional semifinal.

Three grand slams highlighted an outstanding offensive effort from the Wildcats in a blowout of the Hornets last Thursday.

Kyle Steien, Jackson Shramek and Isaiah Washington all delivered with the bases loaded, each connecting on grand slams in the rout. Tyler Thompson and Bryan Rogstad each had four-hit days, with Rogstad scoring five runs and Thompson scoring four. Shramek tallied six driven in on the day, while Washington reached in all six plate appearances with two hits, four walks and four driven in. Eli Swenson took the win on the mound.

The Wildcats overcame an early 4-0 deficit, but could not keep up late with the Mustangs at home on Friday.

B-T climbed back from the first-inning hole to eventually knot the game up at 10 on a two-run homerun from Matthew Waldera. That would cap the scoring for the Wildcats however, as the Mustangs pulled away with three runs in each of the final two innings.

Waldera led hitters with a three-hit game that included his home run, two base hits, a walk and a hit by pitch. He drove in three runs for the game. Cain Fremstad also had a two-hit, three-RBI game, and Shramek had two hits including a double, a hit by pitch and four runs scored.