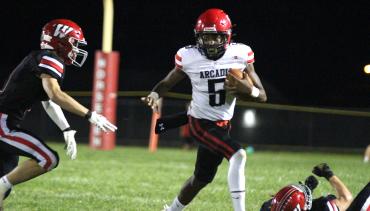 Sophomore quarterback Kaiden Rotering rushed the ball around the outside for Arcadia after escaping from the pocket in the second half of a 40-0 Coulee Conference loss at Westby last Friday.       (Times photograph by Benjamin Pierce)

The Arcadia High School football team knew from its first practice that this season was going to be more about development and growth than stacking up wins and big plays.

It was obvious in a 40-0 loss at the hands of Westby last Friday that the host Norsemen featured a much more experienced group. The loss, though, is something Arcadia can point back to when teaching its young players, according to coach Derek Updike.

The Raiders are learning the hard way what it takes to forge a strong football season as the program rebuilds a bit from a 2021-22 season that saw Arcadia finish with a 7-2 record. The visitors on Friday struggled to move the ball and utilized two quarterbacks in Cam Boland and Kaiden Rotering.

“We started a couple freshmen, we have a lot of sophomores in there, and they’re getting seasoned like a good piece of meat,” Updike said.

Arcadia (2-3 overall, 1-2 Coulee Conference) conceded 416 yards on the ground to Westby (4-1, 2-1), which repeatedly broke off long runs to set up scores. Statistics were not reported for the Raiders.

The first score of the game came on a nine-yard run for the hosts in the first quarter, and Arcadia had a chance to be in the game. But Arcadia’s offensive 11 showed its inexperience a bit.

The Raiders took advantage of a short Westby kickoff and drove to within 15 yards of a score before an interception in the end zone ended the drive on fourth down.

Another late mishap ruined a chance for the Raiders to get on the board, still trailing by one score in the second quarter. A penalty on Westby pushed Arcadia to the 10-yard line with a chance to tie the game, but the Raiders committed a false start on the next play and the drive stalled with an interception in the end zone.

Westby scored on the next drive and added a third touchdown before the half ended to lead 20-0 at the break. They added a pick-six in the third quarter to add frustration for a Raider offense that did not have much time to operate after the snap.

Blocking continues to be a focus for Updike’s offense, which was overpowered on Friday by a Westby team that is known for its physicality.

“If we can’t block the other team, it doesn’t really matter what offense you’re running,” Updike said. “Right now you watch those plays, they’re just running through all of us. When we have a play and every guy gets beat on one on one, it’s kind of hard to make a play.”

Arcadia is scheduled to host Black River Falls (1-4, 0-3) this week as its Coulee Conference run continues. Updike said his team will need to be prepared for another strong offense, and despite Friday’s loss the Raiders are keeping their focus where it needs to be, he said.

“Our seniors have been really receptive and are trying to have open arms with these (young) players. They want to be competitive, and it’s tough to have a night like this where you’re shut out 40-0. But I thought they had a good attitude about it.”